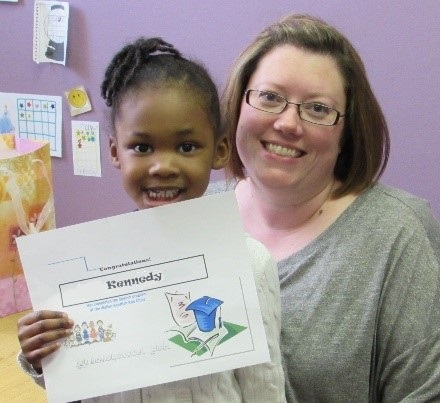 “When I see other kids with speech issues I have shared our family’s experience at Scottish Rite. Speech therapy gave Kennedy the confidence she needed to recite her poems, communicate her needs and to live her life proudly with the ability to speak in a way that others could understand her! Thank you!”   ~ Kennedy’s mom

The Walker Scottish Rite Clinic was recently sharing our story at the new partner site located in North St. Louis City at the Tabernacle Hub. Afterward a proud father walked up to share his Clinic story, saying, “I tell people about my daughter Kennedy’s experience at Scottish Rite all the time!” At the Clinic, we love when this happens.

Kennedy’s speech-language pathologist, Kate Bockhold, remembers her fondly. Back in 2013 Kennedy spoke quietly and was difficult to understand. During her time in therapy at the Clinic, Kennedy learned how to slow her rate of speech and to produce all syllables and sounds in words. Through her parents’ dedication to consistent attendance, and Kennedy’s hard work, she graduated eight months later in April 2014. At that time, Kennedy was featured in a short Clinic video showing her dramatic improvement. You can view it here!

Now eight years later, Kennedy is thriving! According to her mom, Kennedy participated in the Black History Month program last year at her school and recited a poem via video recording. She has participated in multiple assemblies at school with singing, speech or dance roles. Kennedy is also a proud and dedicated member of the Student Council.

Success stories like Kennedy’s are made possible through our donors. Each year, hundreds of children like Kennedy receive free speech-language therapy thanks to community support.